Tien was an Inferni belonging to Leilah's coven.

After Leilah gives Larika her Magic Wand to kill Tikka, Tien along with Serafin accompanies Leilah to theShield of Light's safe house where they find Larika trapped by magic. After killing her as well as the policemen who survived, the three threaten a local Latino family to tell them what happened. During the ordeal Serafin walks over to their crying baby and the mother instinctually runs to protect it but gets thrown back by Serafin. Tien and Leilah proceed to murder the family.

When they find Tikka in a strip bar taken by an armed gang, the three break up and kill all the gang members, as well as responding police units.

The three chase Tikka and the cops who protected her, Ward and Jakoby. After tracking the phone communications, the Inferini confront Ward, Jakoby, and Tikka in a gas station. Tien is hit by Tikka and gets into a shootout with Ward before Tikka, Ward, and Jakoby manage to escape.

Having anticipated that Tikka would return to Shield's safehouse, Tien and Serafin hide and then ambush them. In the fight, Tien manages to disarm and incapacitate Jakoby, but is stunned when Ward throws a dumbbell at her. This gives Jakoby time to tie a bomb to Tien and detonate it, killing her.

As an Elf, Tien possesses strength, agility, and reflexes superior to a human. As an Inferni, she is a capable killer, being able to finish with a whole battalion of armed gangsters and police. She is a skilled fighter, as well as a user of knives and guns.

Tien is portrayed by Veronica Ngo in Bright. 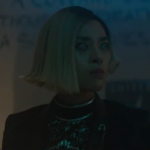