Sargon the Great was one of the greatest wizards of known history.

Sargon was a wizard who rose to greatness during a period of time when nearly all civilizations were being ruled by magic. He hailed from Akkad, an ancient empire in Mesopotamia during the Bronze Age.[1] Legend holds he achieved immortality by "blessing his own body with magic".[2] He was eventually murdered by the Dark Lord via a magic annihilation disease in the late 22nd century. Legend says the first Magic Wand was created from Sargon's remains. 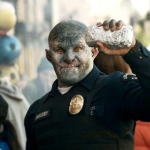