Black[1]
Nick Jakoby is a formerly bloodless Orc and an officer with the Los Angeles Police Department.

Nick Jakoby comes from a family of unblooded Orcs, those who do not belong to any blood clan and live among humans. Receiving the rejection of both humans and Orcs all his life, Jakoby wished to be a policeman, finally became the first Orc to do so in the United States.

Jakoby was the first Orc police officer to ever join the Los Angeles Police Department. A rookie cop with a lot to prove to his fellow officers, he is partnered with the seasoned Human officer Daryl Ward. Together, they become embroiled in a plot that involves a powerful artifact – a Magic Wand.

Jakoby is well aware of the friction that exists between humans and Orcs, but is not fazed by it. When it comes to the law, he never fails to do the right thing. He also takes things very literally, and at times struggles to understand when people are being passive-aggressive towards him. When attempting to be ironic, he isn't always successful and can take things too far.

As a police officer, Jakoby is well-versed in the use of firearms, but is shown to not be as proficient of a shooter as his partner.

As an orc, Jakoby possesses inhuman strength and resilience, but is also naturally heavy and slow compared to the average human as well as elves. His strength allows him to easily knock humans off their feet and through the air with enough effort. His durability allows him to survive being rammed into by a car and plowed through a wall.

Nick Jakoby is portrayed by Joel Edgerton in Bright. To help Edgerton develop his approach to playing Jakoby, director David Ayer had him improv describing a dating experience Jakoby had in character to Ward:

I found myself talking about being on [the dating website] O-Date. Orc Date. It hadn't gone so well because I had to tell her that I was a policeman and she went into the bathroom and never came back to the table. And I found this kind of super sweet, somewhat pathetic, but pathetic in the sense that he's not willing to be ruthless in the world to make a stand. Just believed anything anybody said to him kind of character and saw the goodness in everybody and kind of hoped for goodness to be reflected back to him. That helped shape a lot of interactions with Will and I and his responses to certain things in the movie.[2] 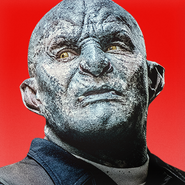