"Fuck is you squaring off on, bitch?" ― Daryl Ward[source]

Brown[1]
Daryl Ward is a Human police officer working for the Los Angeles Police Department. He is a human Bright.

Ward is a police officer working for the Los Angeles Police Department. He is a seasoned cop with a wife and child, and is facing economic problems. Following leave after an incident in the line duty, Ward becomes partnered with the force's first Orc officer, Nick Jakoby. Together, they become embroiled in a plot that involves a powerful artifact – a Magic Wand.

Ward is one of the best officers in the LAPD. His family and sense of morals come before everything else. If Ward sees a situation demanding action, then he will take it.

As a trained police officer, Ward possesses fast enough reflexes to easily gun down four corrupt police officers that were already standing behind him ready to kill him and his partner, Jakoby. As a human, he is faster and more agile than stocky races like orcs, but less so than elves. He is also noticeably resilient for a human, able to survive attacks from the incredibly strong orcs and elves.

As a Bright, Ward is able to safely wield a Magic Wand though he is unaware of this ability until the final confrontation with Leilah. Using the spell Vaykwaros, Ward was able to incinerate the evil elf and set the Shield of Light safehouse on fire when earlier Tikka only managed to restrain Leilah with the same spell.

Daryl Ward is portrayed by Will Smith in Bright. In the original draft of the script written by Max Landis, the character's name was "Scott Alvins".[2] 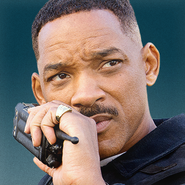